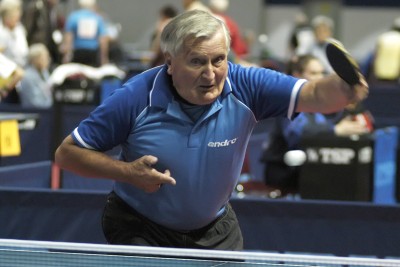 Berni Vossebein competing in over 80 men's singles at the 2006 World Veteran Championships in Bremen (Photo: courtesy of DTTB) The oldest living German champion, Berni Vossebein passed away, a result of a stroke, on Tuesday 12th January in his hometown of Bochum, he was 95 years old. One of the leading players in Germany in the 1940s and 1950s, he won seven doubles titles at the national championships and was twice the men’s singles runner up. Hans Wilhelm Gäb, DTTB Honorary President, paid a moving tribute to the “Lion of Bochum”, a name aptly christened by Heinz Eil, an ARD radio reporter. "With him an age in our sport comes to an end, the epitome of a fighting spirit at the table, a