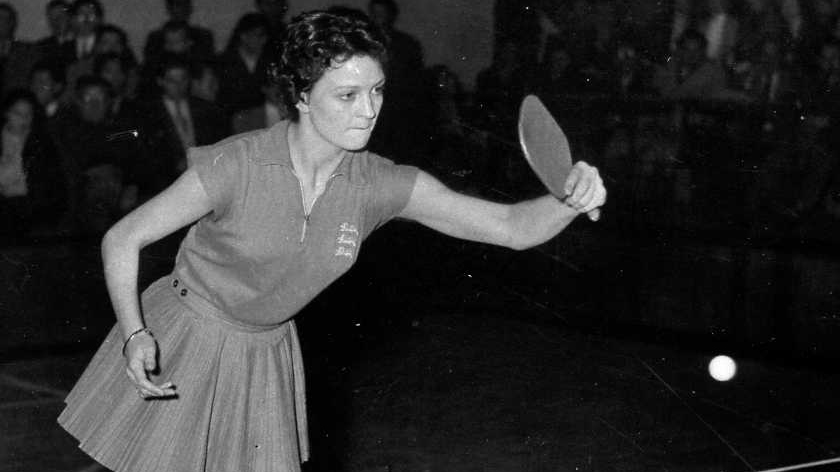 Five World Championships remain strong in my memory; the five in which I participated in together with my twin sister Rosalind

1951 Vienna
It was the first World Championships for which we both qualified; it was absolutely fantastic to take part in this event, in a beautiful city.
Unbelievable, that we reached the final of the Women’s Doubles, not even 18 years old! We even beat the favourites Angelica Rozeanu and Sari Sasz from Romania! I will never forget the applause from the audience, among them British soldiers who were stationed in and near Vienna at that time.

1952 Bombay
The following year, 1952 in Bombay, India, we again reached the final of the doubles but this time lost to Shizuki Narahara and Tomie Nishimura, a Japanese pair who we did not know enough as the Japanese team were taking part in a World Championships for the first time. However, it was a great experience to get used to penhold players!

1953 Bucharest
In 1953 in Bucharest, we had a successful tournament, reached the doubles final again, this time against Angelica Rozeanu who was partnered by Gizi Farkas from Hungary. We fought well but had to congratulate our opponents in the end. Another silver medal!

1954 London
A year later, in London 1954, things were different. Exciting matches watched by nearly 10,000 spectators in Wembley who were thrilled to see two English pairs in the finale of the women’s doubles – Ros and I against Ann Haydon and Kathy Best.

We won 3-1 in a close match. It took us a few minutes to realise that we had won, and then flowers were thrust at us, flash bulbs exploded. On our 21st birthday we had clinched the World Title!

1955 Utrecht
The last Worlds my sister Rosalind entered was 1955 in Utrecht. We had a good tournament, reached the final in the doubles again, this time against Angelica Rozeanu and Ella Zeller-Constantinescu from Romania. They played slightly better and won gold. Anyway, our results with two gold and three silver medals in altogether five Championships was good.

Ros could retire quite pleased and concentrate on starting her family. Which she did!