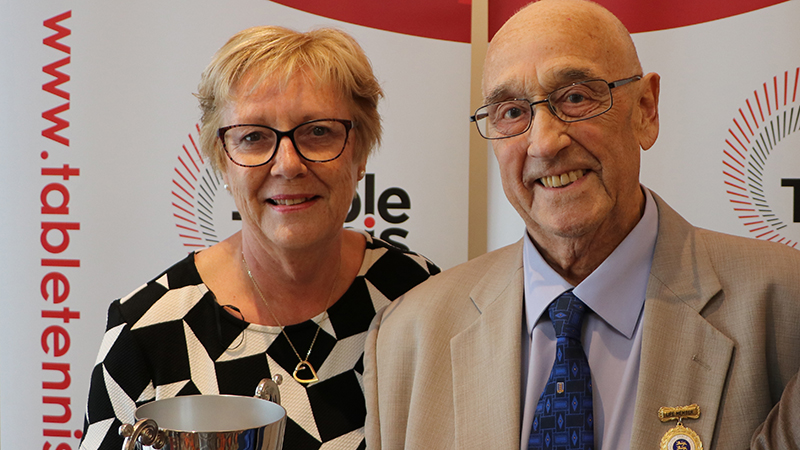 It is with great sadness that the death of Tony Chatwin, a stalwart member of Table Tennis England is announced. He passed away on Tuesday 10th April.

Both nationally and internationally he was a familiar face in the role of umpire and referee; a genial smile, he was universally respected.

Always calm, always he was a person to whom you could turn for constructive well thought out advice; in my days prior to working for the International Table Tennis Federation, he was always my first choice to be the referee for home matches in the European Club Cup of Champions. Always the whole proceedings were conducted to perfection.

He is sadly missed

by Diane Webb and Paul Stimpson

Tony Chatwin, one of the longest-serving and most dedicated servants of table tennis in England, has died at the age of 84 after a long illness.

Tony spent a lifetime involved in the sport after taking it up in 1952, becoming one of the country’s most respected officials and administrators at every level from local to international.

He began his career in Derbyshire, representing the county at senior and veteran level but it was after qualifying as a National Umpire in 1966 that his lifetime of service started to take on a broader dimension. He was in the first group of National Referees in 1971, qualified as an International Umpire in 1973 when the qualification was first introduced, and was the third English official to be appointed an International Referee, in 1992.

“He was a close and dear friend who worked tirelessly for the sport at all levels. He was respected and admired worldwide. His work within the Derbyshire County knew no bounds and it will be impossible to replace. My love and support goes out to Pat and the family at such a sad time.” Sandra Deaton, Chair Table Tennis England

He was appointed to a number of prestigious tournaments, including Deputy Referee when England hosted the World Championships in both 1977 and 1997.

Further appointments as Deputy Referee came at multiple English Opens; as an umpire he officiated at the 1969 World Championships in Munich, European Championships in Rotterdam (1972), 1976 (Prague) and Moscow (1984) and the Commonwealth Championships in Cardiff in 1973, not to mention several international matches and Open tournaments at home and abroad.

But it was not just as an official that Tony served the sport; he was also an administrator who played a key role in so many areas of the sport at every level. His committee involvement dated right back to the start of his playing career, as a member of the Derby Table Tennis League Committee. He went on to be Chairman on three separate occasions and became President.

“Tony made a great contribution to English table tennis as an excellent referee and official and also a respected committee member. He was someone of the highest integrity and was a key member of so many committees, including from my point of view the Commonwealth Technical Committee. I think he was regarded as a rock inside the association; everyone trusted him and could rely on him. I was very sad to hear of his passing and am thinking of his family at this time.” Alan Ransome OBE, former Chairman of the English Table Tennis Association

Also at a local level, Tony was Secretary of Rolls Royce Table Tennis Club for 28 years and served on the committee of Derbyshire Table Tennis Association since the 1960s, including as Secretary, Chairman on three occasions and President since 1999, for which service he was made an Honorary Life Member of the association.

“I first met Tony over 50 years ago when we were both umpires. We have trodden a long path through the association and he was a good and loyal friend and a loyal supporter together with Pat of the 100 club functions. He will be truly missed.” Doreen Stannard, Table Tennis England Hon Past President

He was part of various committees, including Development, Tournaments, Trade, Disciplinary and Honours, as well as the Appeals Board, and was National Elections scrutineer.

He was a member of the National Umpire and Referees Committee from 1970 to 1994 and Chairman from 1994 to 1997, also serving on the Referees International Selection Panel. He was also President of the Association of English Table Tennis Umpires and national representative of the England branch of the Swaythling Club International.

“As Deputy Chairman, he was an immense support to me and other colleagues on the Management Committee up to 2003 and after that continuing as a calm and thoughtful source of advice right up to this year. I remember well working with him at the European Championships in 1994 and at the Commonwealth Games in 2002, a kindly man who was so committed to our sport and who served it so well. My thoughts are with Pat and the family.” Mike Smith, Board member and Honorary Life Member

Tony’s contribution to the sport was recognised with a number of honours and awards, including becoming a Vice-President of the ETTA in 1985 and an Honorary Life Member in 1995.

He was presented with the Ivor Montagu Award in 1993, the Malcolm Scott Award in 1996 and the Keith Ponting President’s Memorial Trophy in 2017, the latter presented for exceptionally long and outstanding service to Table Tennis England.

Tony is survived by his wife Pat, who is herself a Vice-President of Table Tennis England.