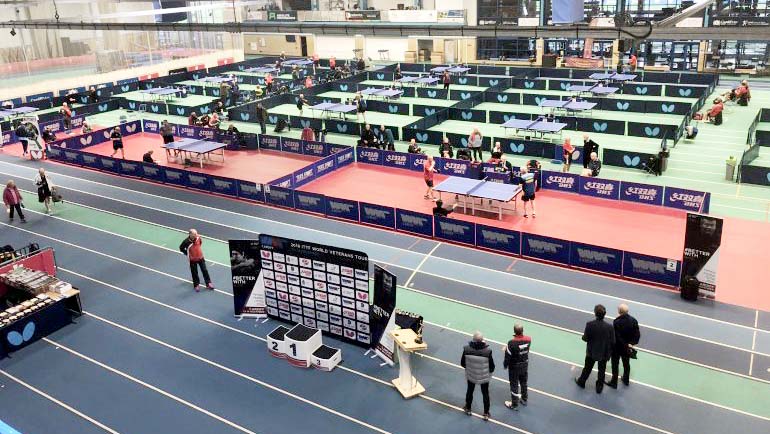 Once a promising junior; then a successful senior; competing on home soil, Welshman Ryan Jenkins, alongside Denmark’s Pia Toelhoj emerged the most successful players at the 2019 ITTF Veteran World Tour tournament staged at the Cardiff Metropolitan University, on Saturday 14th and Sunday 15th December.

Both concluded play in the principality’s capital city as the “Champion of Champions”.

In a group organised event, Ryan Jenkins, who has represented Wales at every possible level from cadet to veteran and plays a major role in promoting the national association’s fortunes alongside younger brother, Stephen, emerged the men’s singles 40 years winner.

He finished ahead of England’s Daryn Dobson-Bailey and India’s Navid Syed; later he won the “Champion of Champions” title, accounting for Hungary’s Istvan Szalai in the final (11-6, 11-1, 11-6).

Similarly, in an all-play-all event, Pia Toelhoj emerged unbeaten to don the women’s singles 40 years crown; she concluded matters with England’s Izzy Bramhall and Doreen Tierney next in line.

Extracted revenge
Following the success, Pia Toelhoj overcame Germany’s Ursula Luh-Fleischer (11-8, 11-3, 11-2, 11-6), to crowned the “Champion of Champions”, a contest in which to some extent, she extracted revenge.

Sweden’s Petra Sörling, ITTF Executive Vice President, the player with whom Pia Toelhoj had won the women’s doubles 45 to 49 years title at the 2018 World Veteran Championships in Las Vegas, had experienced defeat in women’s singles 40 years at the hands of Germany’s Ursula Luh-Fleischer (7-11, 11-4, 11-5, 11-5).

For Petra Sörling, it was her only defeat; thus in a group organised event, the silver medal was her reward.

On Sunday 16th March 1975, Diccon Gray represented Millom in the English Schools Team Finals in Matlock. Lining up alongside Ian Reed, Michael Carr and Andrew Pachul the quartet won the under 13 boys’ event; the guest of honour, a renowned English cricketer, Geoff Boycott.

Why do I remember the occasion so vividly, not because of Geoff Boycott; my school, the Queen’s School from Wisbech, was on the receiving end! We lost 7-1!

The tournament brings to a close the 2019 World Veteran Tour.