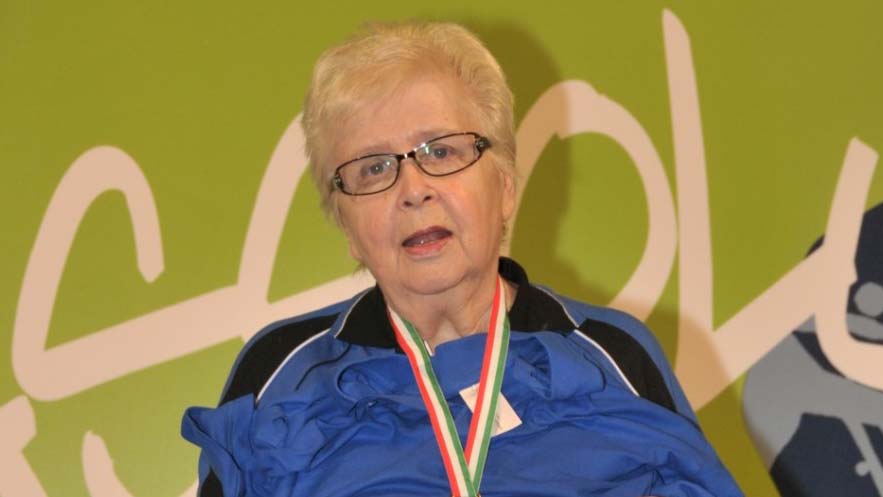 It is with great sadness that the death of Edith Santifaller is announced, born in Monday 18th July 1932, she was 86 years old.

A valued member of the Swaythling Club, it is her exploits in the World Veteran Championships for she became well known internationally.

Notably, she competed in no less than 17 editions of the World Veteran Championships, the most recent being in 2014 in Auckland; overall she won 11 medals, six being gold, two in singles events, four in doubles.

Table tennis for Edith Santifaller started in 1949 when 17 years old, her father bought her a table tennis table. She took part in her first tournament in Merano, winning the women’s singles, women’s doubles and mixed doubles titles. Soon after she made her debut in Milan at the Italian Championships; it was the start of a career that brought success after success. She won 112 Italian titles, the last in Lucera in 2016.

Experienced, the knowledge was put good use; addition to playing, she was the coach of the Italian junior team, leading the nation’s delegations at whole range of events.

Moreover, she held positions within the European Table Tennis Union and the International Table Tennis Federation. In 1983 she was presented with the “Knight of the Republic” award from Sandro Pertini, the Italian President, before in 1999 receiving the ITTF Merit Award and soon after the Golden Star for Sport Merit from the Italian National Olympic Committee.

Notably from 1978 to 2016 she served as President of the Provincial Committee of Bolzano, whilst on behalf of the Italian Table Tennis Federation she was involved in the organization of the 1992 Olympic Games Qualification Tournament, followed by the Italian Open in 1994 and 1996. Furthermore, she was involved with the organization of many European League matches, promoted the South Tyrolean movement and was a founder member of the Maso della Pieve of Bolzano sports area. Also in liaison with Gianfranco Trovo, she was the creator of the Transalpine Trophy, this year organized by the Italian Table Tennis Federation.

Recently, at the Italian Championships in Bolzano, Renato Di Napoli, President of the Italian Table Tennis Federation, organized the presentation of a plaque to Edith Santifaller in recognition of her contribution both nationally and internationally. It was received on her behalf by Franz Mair, her husband.

Professionally, she has always worked as a teacher and director of the Rudolf Stolz Elementary School in Bolzano.

Our condolences to her friends and family, a lady of whom all had the highest respect; she is sadly missed.