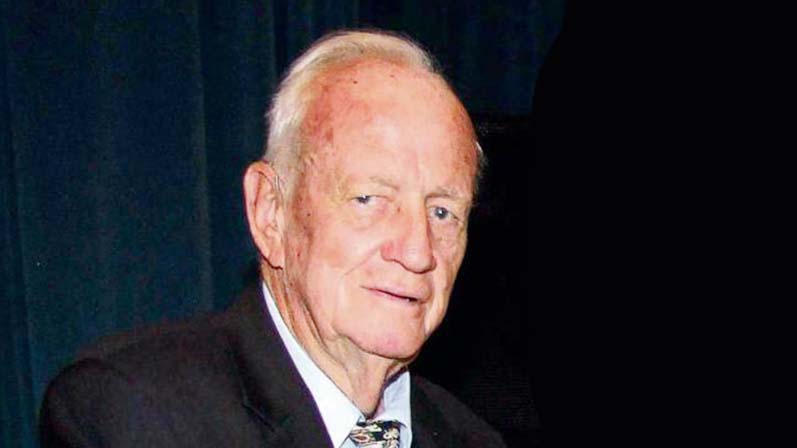 Dedicated to promoting table tennis and tennis, highly respected in both sports, a resident of Marloffstein, Dr. Peter von Pierer passed away on Sunday 10th February; he was 88 years old.

A sportsman and volunteer, he influenced the direction of each sport; now the DTTB (Deutscher Tischtennis-Bund) and the DTB (Deutscher Tennis-Bund) say “good-bye“ to a long term friend and official

Born in Vienna 0n Monday 17th March 1930, Peter settled down in Bavaria; he engaged himself as member of the DTTB Presidency and at the same time as team captain of the DTB. Between 1975 and 1981 he was a sport official and later, until 1985, Vice-President of DTTB. In addition, he advised both DTTB and DTB as a lawyer in legal matters and promoted modern development within competitive sports.

Among many honours, Peter received the German National order “Bundesverdienstkeuz“. As an athlete, he was remarkable in both sports; he was excellent at table tennis and much more than passable in tennis.

In the 1950s, he was amongst the best table tennis players in Germany. Between 1951 and 1954 he took part in four international matches and was selected for the 1954 World Championships. He represented Germany in two team matches. During the last All German Championships in 1954, which included both the Federal Republic of Germany (West Germany) and the German Democratic Republic (East Germany), he reached the men’s singles final, losing to the one and only Conny Freundorfer, the winner of an incredible nine men’s singles titles between 1953 and 1961.

Later, he became Chair of the European Table Tennis Union’s Youth Committee succeeding Sever Danet, an age when the ETTU had an Executive Committee (the Officers) and a Management Committee (Officers plus elected members, later Officers plus Committee chairs).

Meanwhile, in tennis, Peter also reached remarkable goals. For many years he was named on the Bavarian Ranking list; in those days he played for the best German Team, 1. FC Nuremberg, winning the German Team Championships.

“Today this double engagement in tennis and table tennis would be hard to imagine but I managed to do it at that time without problems. In winter, I mainly concentrated on table tennis, in summer on tennis.“ Peter von Pierer (DTS 1977, now Tischtennis“, the official DTTB magazine).

At the age of 17 years, Peter started to play table tennis at TV 1848 Erlangen, near Nuremberg. At this club the always exemplary sportsman also celebrated his farewell from active competitions; he played his last team match in the fourth division, the “Kreisliga“. In the same year, Peter von Pierer finished as official and transferred the leadership of the tennis district “Mittelfranken“ to younger hands.

We will always remember him.