Micky Thornhill (centre) with Ron Thompson (left) and (right) Brian Kennedy at the YMCA in Wimbledon prior to competing in his first junior international match against Sweden (Photo: courtesy of Diane Webb)

It is with great sadness that the death of former England international Michael Thornhill, always known as Micky, is announced.

Born in Croydon in South London on Monday 26th January 1931, he was 87 years old; he passed away in a nursing home in Huddersfield in the north of England.

Micky started his table tennis career in the Staines League; it wasn’t long before he became their number one player. At that time the league teams consisted of four players which led to some very late nights with 12 matches being played. All the match practice obviously stood Micky in good stead. He progressed to play regularly for the county of Middlesex before representing for England for a decade.

A good technical player, mainly a defender but one who could switch to attack with ease, he became the English Junior Boys’ champion in 1948 before making his senior England debut on Saturday 4th March 1950 against the United States, a fixture England won four-three. Many other international matches followed including a tour of Germany in 1951.

At the time there were three table tennis associations in Germany, one for the East, one for the West and a combined All-German Association. There were four matches against both East and West followed by a full international in opposition to the All-German Association’s team. England won all fixtures but possessed the opinion that it would not be long before Germany would be a strong table tennis nation. 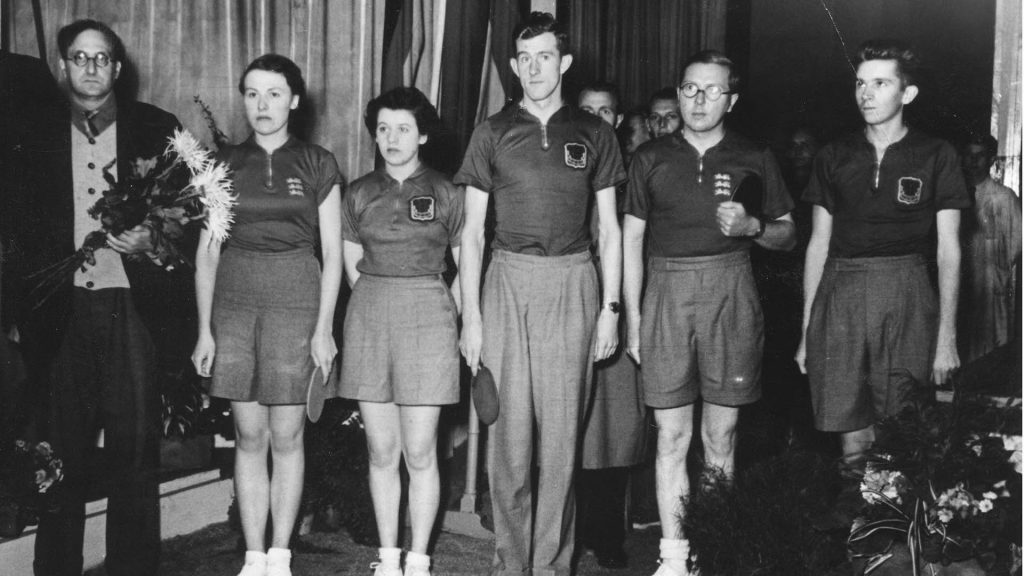 Travelling to the matches was onerous and sometimes there were journeys of up to eight hours which took quite a toll on the players.

Another lengthy trip, this time a 21 hour flight to Pakistan, Micky was one of a trio, alongside Brian Kennedy and Ann Haydon. It was England’s first visit to that country; a successful tour and one where the visitors were treated to wonderful hospitality.

Micky played in five World Championships gaining fourth place in the Swaythling Cup in 1951. In the Men’s Singles he twice reached the last 16 and a similar position was also reached in the Mixed Doubles with Peggy Franks in 1951. In the English Open in 1960, Micky stood on top step of the Men’s Doubles podium with Johnny Leach, an achievement the pair emulated at the first English National Championships in 1960.

The winner of over 50 open tournaments, home and abroad, alongside Jimmy Lowe and Bernard Crouch, in 1955 representing the Staines League, Micky won the Wilmott Cup, a national team competition. Notably, to show the calibre of his play he had an impressive win against Johnny Leach, at the time the World Champion, in the annual match between the Champion County and the Rest of England, a contest played in front of a 900 strong crowd.

Meanwhile, as well as playing table tennis at the top level Micky worked for Dunlop where he was the Assistant Manager to Victor Barna.

A gifted sportsman, Michael’s sporting prowess wasn’t restricted to table tennis; he was a fine cricketer, being a member of the Ashford Club in Middlesex. Also he was a most proficient hockey player.

Alongside Micky’s wonderful playing achievements he was deservedly honoured by being made an Honorary Life Member of the Middlesex County Table Tennis Association.

Notably, he was one of the founder members of the Swaythling Club International over 50 years ago in 1967; Michael’s passing means that Joe Veselsky is the only living member of that group.

Our condolences go to Michael’s wife, Sue, and all his family.