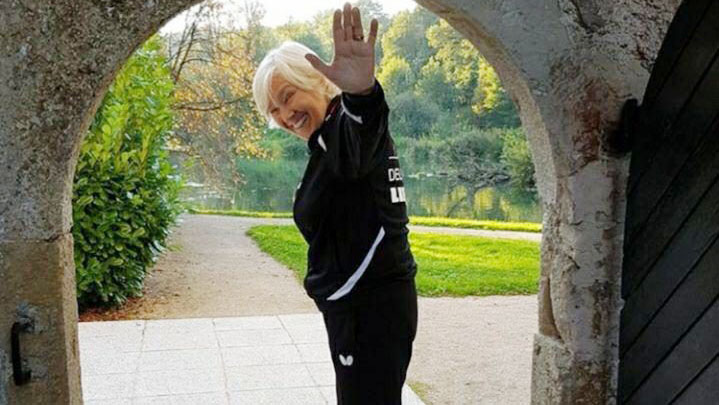 After 37 years as a national coach for the German Table Tennis Federation (DTTB), Eva Jeler has officially retired from her duties.

However, unofficially, she remains as active as ever!

“I will continue to work in table tennis, that much I can say.” Eva Jeler

It would be hard to imagine her disappearing from the global table tennis stage; in her many years with the DTTB, she has collected more international medals than any other German coach.

Her international career began as a player in the former Yugoslavia and continued as a coach after a sudden injury brought an abrupt end to her playing career at only 23. Unfazed by this setback, she joined the Bavarian Table Tennis Association (BTTV) in Germany as a state coach, beginning her work with young German talented players, a situation that would span the next four decades.

In 1983 after a less-than-perfect performance by the German men’s team at the World Championships in Tokyo, she joined the DTTB as a national coach with the vision to reshuffle the structure of the sport. She was charged with the creation and management of the German talent identification system and subsequent youth programme – a system that is still in use today. She has been responsible for producing some of the world’s top players.

The efforts showed results within the next few years, starting with a gold medal for Rosskopf and Fetzner in the boys’ doubles event at the 1986 European Youth Championships in Louvain-la Neuve, Belgium, followed by mixed doubles gold for Wosik and Nienhaus the following year.

Later the achievements were surpassed by gold medals in the boys’ teams and boys’ singles events (for Torben Wosik), ultimately eclipsed by the triumph at the 1989 World Championships in Dortmund when Rosskopf and Fetzner claimed the men’s doubles title. They were only 19 and 20 years old at the time and beat the experienced team of Kalinić/Kucharski, both medalists and (in the case of Kalinić) champion at former editions of the World Championships.

A meteoric comeback of German table tennis continued when Jeler took over the head coach reigns from her mentor, Charles Roesch after the 1989 World Championships.

There was countless medal success in age groups from cadet to senior throughout the 1990s, culminating in 1996 with total domination of the German women’s team at the European Championships in Bratislava, Slovakia. Nicole Struse won women’s singles gold, Struse/Schall the doubles and the women’s team.

Also there was a bronze medal for Jörg Rosskopf at the Atlanta 1996 Olympic Games.

Even though she continued to work with the cadet and junior teams throughout, it was only after her resignation of the head coach position following the successful Atlanta 1996 Olympic Games that Eva returned to her true passion – building a new generation of table tennis players.

She returned to a leading role within the German youth programme as the manager of the German youth teams. In addition she assumed the head coach position of the German National Training Centre (DTTZ) in Heidelberg until its move to Düsseldorf in 2007 and as national coach for the cadet boys. Countless successes followed in this period, with triumphs at the 2000 and 2003 European Youth Championships in Bratislava and Novi Sad respectively standing out. In both years, the cadet boys won the team events, Christian Süss won the cadet boys’ singles title in 2000, Ruwen Filus followed in his footsteps in 2003.

After 12 years in the trenches of youth table tennis, Eva agreed to again take on additional responsibilities as the women’s head coach in 2008 – never relinquishing her role with the junior girls’ team. Here, as well, her efforts were met with success: a women’s singles triumph for Wu Jiaduo at the European Championships in Stuttgart, Germany in 2009 and a bronze medal for the women’s team at the World Team Championships in Moscow in 2010.

Now, with the women’s and girls’ teams in top shape, Eva again took over the cadet boys in 2012. Also in 2012, her fruitful collaboration with the ITTF High Performance and Development department commenced. Since then, she has been active especially as a Hopes expert, leading Hopes activities on regional, continental and world level in Asia, Africa, Latin America and Oceania, as well as in women’s development.

“The contribution of Eva has been priceless especially to the worldwide Hopes movement, but not only. Her passion is contagious and so is her dedication, which I also had the opportunity to get infected personally, when a young player myself and had the privilege to work under the watchful eyes of Eva. At ITTF we are very thankful that she not only likes, but also wants to share and pass on the incredible amount of knowledge and experiences that she has accumulated over the years to the young players and coaches from all over the world when on missions. Our sincere congratulations for a super long and extra successful career with DTTB and we hope that our cooperation will continue and who knows maybe even extend,” Polona Cehovin, the ITTF HPD Director, commented on Eva’s retirement.

She has also accompanied many German Hopes players on their own Hopes journeys as their coach. She has  shared her invaluable experience in building talent identification programmes and structures supporting youth development not only in practical training and theoretical educational sessions with coaches and players across the world, but also with ITTF HPD. She has been active as a mentor in the mentorship programme run yearly through the ITTF Education unit, passing on knowledge and guiding mentees on their development pathway.

“Besides all our success in terms of medals, the most important aspect of coaching for me has always been that the players in my charge learned table tennis well – but not only table tennis. There were many times when we would revise schoolwork, learn about different cultures and sometimes even table manners. I am the happiest when I can pass on my knowledge and experience to coaches and players, and I am looking forward to continuing to do so in the future.” Eva Jeler

Asked what besides her well-deserved retirement this future may hold.

“I am definitely not properly retiring. As soon as news of my official retirement became public, I was inundated with new opportunities. There was one that stood out and that excites and interests me very much. While I can’t share details at the moment, one thing is for sure: table tennis will remain a big part of my life, and I will remain a part of table tennis.” Eva Jeler